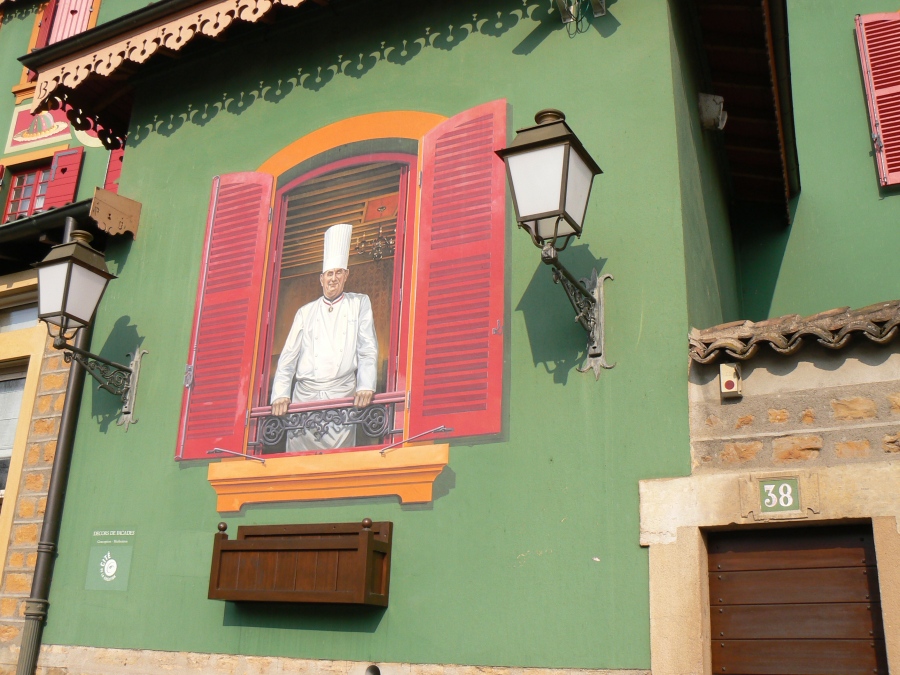 How we find our palates?

Certainly a large part of it has to do with our parents, or the people or person who cooks for and eats with us—we learn to like what we’re fed.  Granted, some of it we don’t like, but there’s so much more that we don’t know if we enjoy because if they don’t like it, we’ll never have it.

I love ‘em, sautéed in butter until they become super dark and sometimes even a little chewy/crunchy, served piled onto a steak (or just by themselves, actually).  Or in a creamy chicken dish, studded through the sauce. I like them raw in salads. I like them battered and deep fried (not healthy, but oh-so-good) and served with a horseradish dipping sauce.

And my favorite is a recipe I dreamed up myself: button mushrooms, sauteed in butter, a splash of sherry (and a little flambe), fresh tarragon, and a sprinkle of salt to finish: served warm by themselves or with bread or cold as part of an antipasto platter, they’re the perfect appetizer.  At least I think they are.

My ex couldn’t stand ‘em—called them “shit bubbles” (yeah, I know—I snickered just now when I wrote that–but that clearly doesn’t help to encourage a child to try something, does it?). Although I suspect he never even tasted them (the name is meant to reflect how they are grown, I guess), I certainly never attempted to serve them to him.

And so I only cooked them when he wasn’t around.

Ditto for dill and red wine (allergies, he claimed, although now they seem to have somehow miraculously disappeared, now that I no longer care to share a bottle with him), and canned green beans and a bunch of other stuff I don’t even remember.

As a result of his disdain for mushrooms and these other items, my son never had the chance to try them, unbiased.  And now, for the most part, he doesn’t eat them. (That said, he continues to surprise me…who ever thought the kid would eat asparagus?!)

Those are pretty simple examples, but I sincerely believe it shows that’s where and how we miss out on discovering all the wonderful tastes in the world.

I think we probably first started to explore our palates and garner an appreciation for a  range of tastes when we went to a friend’s house for dinner and  had to try something new—we were put into a position where to refuse would be impolite.  God forbid you should insult the mother…I remember a time I got caught in mid-plate-pass, trying to foist collard greens off my plate onto my boyfriend’s—just as his mother turned around. Yeesh, that was awkward.

But you try, and guess what?  A new flavor is introduced. Sometimes you like it, sometimes you don’t.  But at least you know.

For some of us, it goes further than that—beyond just figuring out what you like to eat and how you like it prepared.

How do we learn about food? How do some of us become passionate about it?

For me, I suppose it started in my teens when I began to work in restaurants. I got to try dishes I’d never experienced at home, prepared by men and women (mostly men, now that I think about it) with different taste buds and sensibilities—professionals who knew what would happen when herbs were blended, or when spices were introduced to sauces…knew what to expect when cream or wine was added to a dish.

If you stick around the business long enough, and you pay attention, you start to figure out for yourself how to do the same thing. Not on the same level of course, but you muddle through.

And, of course, it didn’t hurt that all this food discovery took place in New York City, where a person has the opportunity to sample every cuisine in the world, to eat out a lot and for me, either visiting friends in other spots or by virtue of living in the city,  I had the fortune to try out some well-known eateries.

But for the life of me, at this moment, I can’t name one you’d recognize, or tell you of a favorite. And frankly, some of the best are probably ones you’ve never heard of anyway.

Not so with one of my other choices.

Paul Bocuse died last month, just short of his 92nd  birthday, which would have been next Sunday.  I can’t say for sure when I first heard his name—maybe it had to do with the Bocuse d’Or—the cooking competition named after him. Or maybe it was when I learned about Michelin and the guide that rated restaurants all over the world—there aren’t many places that reach the distinction of being awarded not one, not two, but three coveted Michelin Stars—an honor bestowed on only a handful of eateries in the world.

I’m not sure how I got it into my head, but in 2007, as we were planning a trip to England and France ( to celebrate our 20th wedding anniversary), I mapped us through the French city of Lyon, which happens to be the home of L’Auberge du Pont de Collonges—the flagship restaurant of the master, and his home base.

Bocuse (the restaurant) has been around from more than half a century, and it’s not terribly difficult to get a table a couple of months in advance, but a reservation is most definitely required.  And so I picked a date and planned the trip so that we would have one night in Lyon…and a booking for dinner.

The restaurant itself is on the banks of the Saone River, about eight kilometres (5 miles or so) north of the city proper.  As we drove in that direction on a two lane road, we followed the path of the river, passing through small collections of houses, their doors right up against the side of the road.  A bit of concentration is required as there are only one or two bridges that ford the winding river at that point, and they’re not always easy to see. Once across, though, we entered into an area with a little more activity.

And there it was.

It’s an oddly shaped building, with curves and straight edges and a courtyard in the middle.  There are plaques embedded in the brick wall at the front of the building, showing high levels of river water over the years, and it’s clear that Bocuse has been flooded on more than a few occasions.

On this night, though, the river was low, the sun had just set and the lights were on.  Muted spotlights were turned to a massive mural of the chef himself that adorned the front of the hunter green and burgundy building. And, on arrival, standing at the front gate to say hello, was M. Bocuse himself. 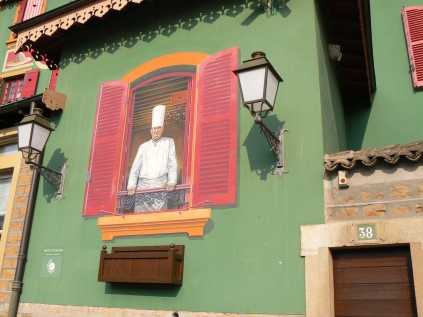 He was tall, and he wore the crisp white outfit of a chef and on his head, a tall chef’s hat that stood straight up.

His face was old, but his eyes were bright—they actually twinkled.  I couldn’t wait to go inside.

The restaurant itself is what you might imagine—several rooms with a dozen or so tables in each, beautifully decorated, each with a different ambiance, yet the lighting is soft and perfect throughout; fresh flowers are everywhere.  Other tables in our dining room included one or two couples, a foursome (I’m guessing they spent a couple thousand euros on their evening, based on the number of bottles of wine they drank), and two gentlemen clearly in a business meeting—one man in a suit, the other in a kimono and sandals with those split toe socks so that the flip-flop-like wooden shoes slipped right onto his feet.

And that night, I had the best meal of my life.

Bocuse serves up a a couple of options for ordering your meal: there’s a classic menu where everyone at the table has the same meal (much as you would if you were at someone’s house, I guess); there’s a modified version, where diners select from a few items; and then there’s a la carte.  We chose the modified menu (probably because there were mushrooms or dill or something one of us didn’t like, she said, without a hint of bitterness).

I began with a lobster bisque—actual name: Cassolette de Homard a l’Armoricaine.  It was delicious–creamy and smooth, with a hint of sweetness and the full flavor of the shellfish (I never did find the recipe for this, although many of his signature dishes can be found on line).  My main was the most beautifully prepared piece of beef filet with a demi-glaze (Perigueux, which someday I will look up to make as well) and some lovely small vegetables on the side.

The next course was cheese—up to three selections from about two dozen, served table side from a couple of large carts. Creamy and soft, hard, stinky, bleu and otherwise–so many to choose from!

And finally:  dessert heaven.  Picture being surrounded by three of four serving tables—each maybe double the size of a standard TV tray table (remember those?), covered in desserts.  Cakes, chocolates, creme brulee; parfaits and petits-fours and fruit tarts; and a beautiful meringue dish called O’eufs a la Neige Grand-Mere Bocuse.  And you can have as much and as many as you like. Sad thing is that, at that point, you’ll most likely be pretty full.  Also it’s a sophisticated spot, so having five desserts would probably be considered gauche.

It was incredible, and worth every dollar (well, euro).  And there were a lot of them spent, that’s for sure.  But, oh man, was it good, and in my book,  well worth it.

We went back a couple of years later with our son, and it wasn’t the same. Yes, M. Bocuse was there again—this time he actually visited every table, the master escorted by one of his many chefs…but he was clearly that many years older, moving stiffly and with a little less of a spark.

I ordered the same meal again, which was a mistake—only because my expectations were high for another memorable meal, and I’m sure it was…but there’s nothing like the first time you taste something amazing—really nothing.

This to me, was a bucket list item, and I got to experience it—not once, but twice.  How lucky I am.